The first ACF pump in the aftermarket

Motorservice is the only supplier in the aftermarket to offer an electric pump designed for purging activated carbon filters (ACF). ACF pump 7.11390.00.0 was developed by Pierburg in Germany and launched as a world first in 2018. Since then, it has been increasingly used by a large number of renowned automobile manufacturers in their series production, proving its considerable potential in the aftermarket. The pump feeds the fuel vapours from the ACF back into the combustion process, reducing the vehicle's pollutant emissions. 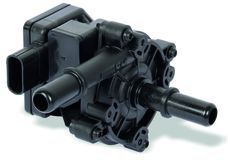 It consists of a centrifugal electric gas pump driven by a single-phase motor and operates at a throughput of up to 50 litres per minute while the pressure remains at only 0.1 bar (approx). Its thermal resistance is increased by innovative active cooling technology used on the electronic components. This ensures that the pump can withstand the harsh conditions in the engine compartment, meaning that ambient temperatures ranging from -10 degrees to +105 degrees are no problem for this equipment. It is also fitted with an integrated pressure sensor, which informs the vehicle control unit of the system pressure.

In the past, the vacuum in the intake manifold was sufficient to draw the fuel vapours into the engine and fresh air into the activated carbon filter at the same time. In modern engine generations, however, there is hardly any vacuum in the intake manifold. Environmental regulations also limit the time window during which the filter can be regenerated. Therefore, in this case, the ACF pump is used for active regeneration of the activated carbon filter.