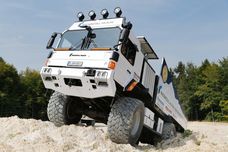 The Düsseldorf, Germany-based tech enterprise Rheinmetall is a main sponsor of an ambitious high-altitude expedition. A team including extreme sportsman and off-road expert Matthias Jeschke and two military veterans, Paul Warren and Chris Bailey, is eager to set a new world record for high-altitude driving. Equipped with two Rheinmetall MAN HX trucks, the expedition aims to reach the highest point on earth accessible to motor vehicles – the 6890m-tall Ojos del Salado, the world’s highest active volcano, located on the border of Chile and Argentina. In order to set a new world record, Jeschke, Warren and Bailey will have to reach an altitude of at least 6,690 metres above sea level. The Rheinmetall MAN High Altitude Truck Expedition sets out today, on 6 November 2017.

As Armin Papperger, chief executive of Rheinmetall AG, explains, “In participating in this project, we want to do more than just show how effective our high-performance vehicles are. First and foremost, we want to draw attention to the needs of veterans and wounded warriors, and give the physically challenged members of the team a chance to prove themselves and – in a vicarious sense – their comrades in the armed forces of countries around the world. We wish the expedition every success and look forward to their safe return!”

Both technically and physically, Matthias Jeschke and his 14-man team from five nations are extremely well equipped for this ambitious expedition. In the words of expedition leader Matthias Jeschke, “We’re highly motivated and have done everything during the one-year planning phase to be as well-prepared as possible. The biggest challenge we’ll face will surely be the unpredictable weather conditions. We’re going to have to cope with storms, huge amounts of snow, ice fields and the extremely difficult terrain up there. Temperature fluctuations and the thin mountain air will put our bodies to the test and as well as demanding the utmost from our vehicles. But we’re still confident of being able to reach our altitude goal of at least 6,690 metres within the six-week window.”

Veterans want to set an example

Expedition members Paul Warren of Australia and Chris Bailey of Great Britain are supporting veterans’ organizations in their respective countries. By taking part in the endeavour, they want to show that former military people and wounded warriors make an important and valuable contribution to society. They have served their country and made great sacrifices.

For Paul Warren, “This expedition is all about capability. Capability of these vehicles and also wounded veterans like Chris and myself. We aren’t defined by our injuries but defined by our actions. We will show grit, determination and resilience to achieve this goal with the Rheinmetall team. What’s important to me is that our abilities take centre stage, not our so-called disabilities.”

As Chris Bailey puts it, “We want to show what we can do and prove how ambitious we are, just like the great majority of our comrades, both male and female. And of course we’re pushing for significant financial support for organizations that look after veterans’ needs and give them a voice in society.”

For this ambitious undertaking, Matthias Jeschke and his team are relying on HX 4x4 (340 HP) and HX 6x6 (440 HP) trucks from Rheinmetall MAN, which are based on the standard off-the-shelf Rheinmetall MAN HX series. Trucks from this series are in service with the armed forces of a number of nations, including the UK and Australia, where they serve in a logistic role during deployed operations. Rheinmetall MAN HX trucks offer the best off-road performance in their class, delivering maximum traction in all kinds of terrain and in all climatic conditions.

The two trucks were specially modified in a few areas to make sure they could handle the environmental conditions and the steep volcanic slopes with stony, slippery surfaces. The engine controls were modified in order to handle the extreme conditions: at 6,000 metres above sea level, the laws of physics dictate that engines produce only around two-thirds of their normal output.

About the team members:

Matthias Jeschke, 46, head of the Rheinmetall MAN High Altitude Truck Expedition, has taken part in numerous expeditions worldwide and has spent years searching for high mountains driveable by trucks: in 2014 on Ojos del Salado he already reached a never-before-attained altitude of 6,675 metres. For over fifteen years, Matthias Jeschke’s company, Extrem Events, has been developing and organizing automotive world record-setting trips and unusual events as well as carrying out product tests under extreme conditions for automobile manufacturers and parts makers.

A former Muay Thai champion, Paul Warren, 38, served for six years in the Australian Defence Force and was wounded in action. Mr Warren came in fifth in the 100-metre run at the Invictus Games in London in 2014, and served as captain of the Australian team in 2016. He has also written an autobiography, The Fighter. This year, having decided not to take part in the Invictus Games, Mr Warren looked around for new challenges: “Rheinmetall gave me the opportunity to take part in high-altitude expeditions. I look forward to the challenges that await us in Chile.”

A soldier in the Royal Air Force Regiment, Chris Bailey, 35, was also wounded in action. Mr Bailey supports the Royal British Legion and Walking With The Wounded and works actively on behalf of former soldiers. He also serves as volunteer head of the Herefordshire Veterans Support Group, which looks after the needs of veterans in the Herefordshire region.

Fundraising and ways of contributing

Possibilities for contributing can be found under

We will keep you regularly informed about the progress of the exhibition at the following website: www.rheinmetall.com/truckexpedition